Hagaman Memorial Library
News and Events at the Library.

The Pearl Harbor News Clipping Scrapbook of Beverly Gordon Witten was losing the information from the news clippings due to flaking of the acidic paper. I used Japanese Rice paper to reinforce pages and hopefully keep the news clippings intact.  The library has used pages from this scrapbook in two displays on Pearl Harbor. 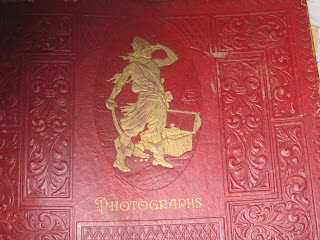 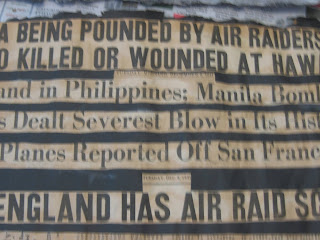 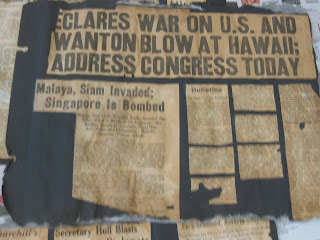 Rice paper reinforcement can be seen in the white line at the bottom of the clippings page. 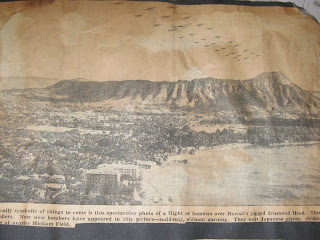 A clipping from the scrapbook states: "Ironically symbolic of things to come in this spectacular photo of a flight of bombers over Hawaii's jagged Diamond Head..." 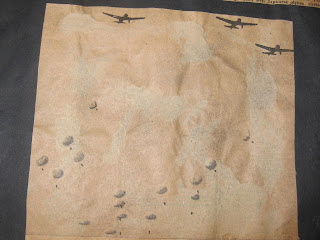 "Japanese planes disgorge parachute troops, such as were reported to have been dropped during the sudden strike on Hawaii. Photo above shows Japanese paratroops practicing over Tokyo." 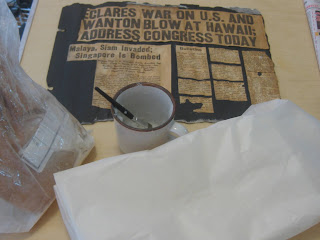 The pages were reinforced with wheat paste and rice paper as seen above. 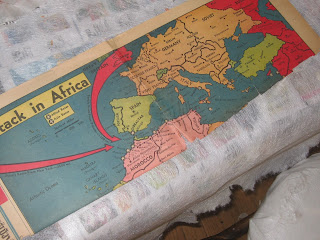 Also worked on, was a map showing a WWII attack in Africa by the Allies. The map was in sections and pieced together by using wheat paste and Japanese rice paper.
Posted by Hagaman Memorial Library at 10:11 AM No comments:

I have been working on the papers of Captain Robert D. Schirmer and include some examples from his military record below: 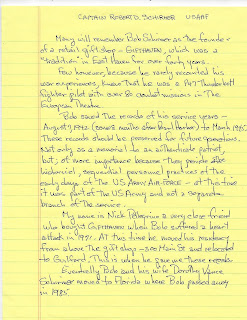 Dedication of papers by Nick Pelegrino 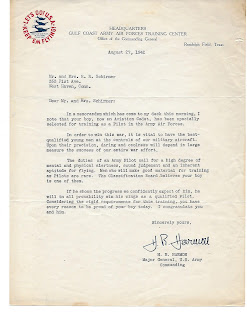 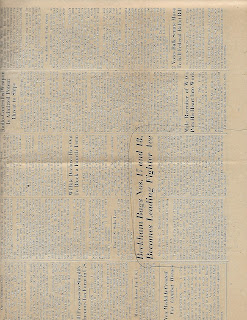 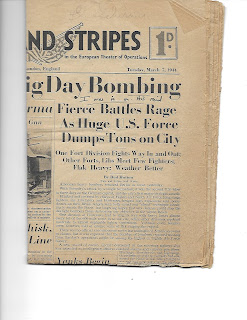 The Above March 7th, 1944 Stars snd Strips has a notation from Captain Schirmer - that he was in the raid on Berlin. 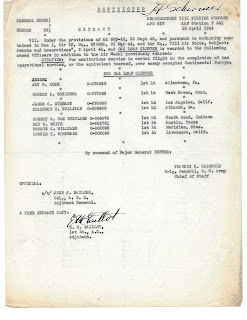 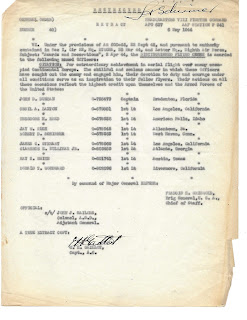 Award of Distinguished Flying Cross- May, 1944 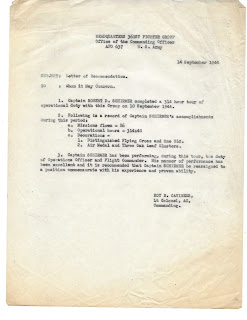 
Posted by Hagaman Memorial Library at 12:42 PM No comments:


I have just finished reviewing and cleaning the John J. Miles collection that was given to the Library in 2014. Due to the Covid 19, I am temporarily working at home and this has given me an opportunity to turn my attention to projects that I normally would find it difficult to accomplish at the library with other responsibilities. This is not a complete set of documents, but I hope to have highlighted some of John Miles' accomplishements. 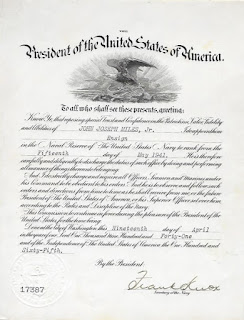 The documents are quite extensive - here, for instance, is an assignment to the submarine base at New London: 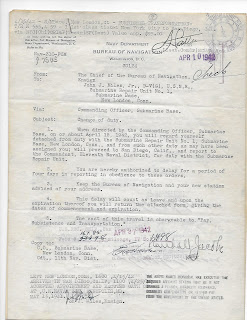 By or before 1942, he was promoted to Lieutenant: 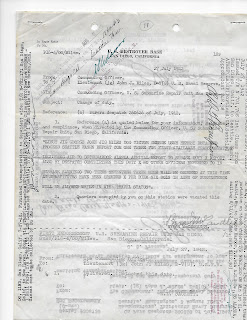 Also in 1942 he was assigned to Adak Island in the Aleutian Islands of Alaska. 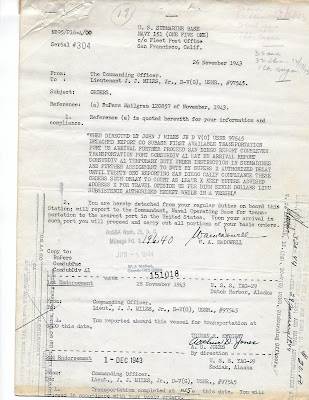 In 1943 he was assigned to the San Diego Submarine Base 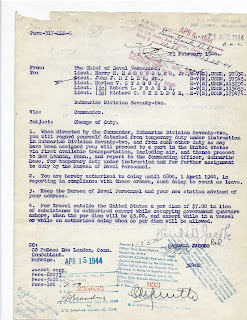 In April of 1944, it appears he was back in New London 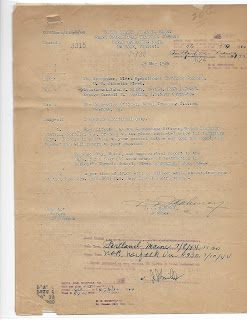 In May of 1944, he was sent to Casco Bay Maine for temporary additional duty in DesLant's Torpedo School - on an interesting note the class convened on 5 June 1944. 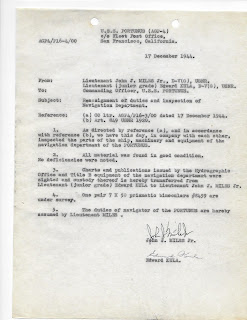 Here is a report of his service on the U.S.S. Portunus 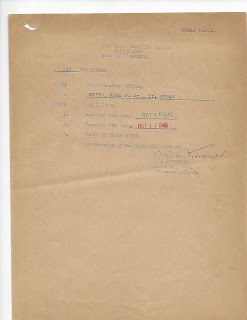 A report from Okinawa 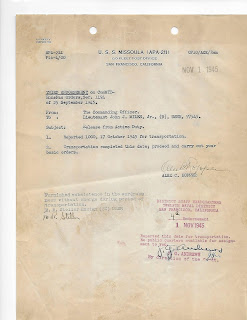 Above is a release from active duty from the U.S.S. Missoula 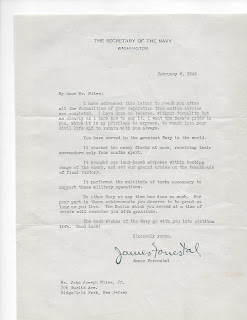 Congratulatory letter from James Forrestal Secretary of the Navy

Posted by Hagaman Memorial Library at 9:37 AM No comments:

Kathy Foulke contacted me today and we are going to discuss the project for the possible grant tomorrow!

Posted by Hagaman Memorial Library at 11:47 AM No comments:


Much of the day was spent working on the grant which asked such questions about the proposed project including the scope and goals.  One thing I mentioned was the fact that the library does not have a catalog of the archives. Digitization of the photos would not provide a catalog entry in the regular catalog of the library, however it might somewhat provide a further "anchor" for the photos in the sense that they would be cataloged on a digitized web site. Still working on the grant and we will see how it goes!
Posted by Hagaman Memorial Library at 1:25 PM No comments:


There is a grant I learned about last week which may, if obtained, provided the library with either digitization opportunities or possibly an opportunity to work with Past Perfect.

The Traveling Archivist Program (TAP) is a program of the Connecticut State Historical Records Advisory Board with Conservation ConneCTion and funded by a grant from the National Historical Publications and Records Commission [NHPRC].

The submission of the grant text is due July 1st, so I am rushing to find our all the details now!
Posted by Hagaman Memorial Library at 9:02 AM No comments:


Today I contacted Kathy Varda of Conservation ConneCTion to find out if there were any websites available for the upload of the East Haven pictures of which the library has several catalogs. Some of the pictures date back to the 1800s. We have already put some pictures on Treasures of Connecticut Libraries a few of which can be seen below: 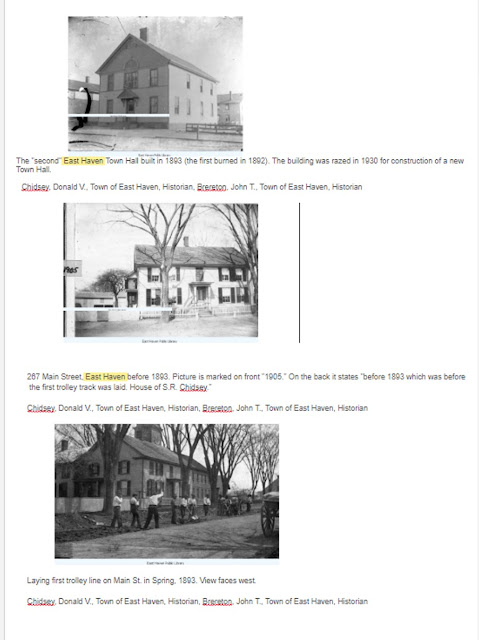 Posted by Hagaman Memorial Library at 11:19 AM No comments: